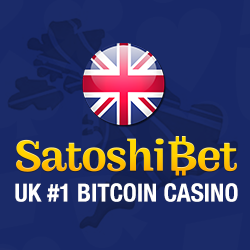 SatoshiBet Bitcoin Casino is one of the first and most trustable casinos in the Bitcoin gambling world. Since its launch early in 2013 people have played over 10 million games, winning over 10,000 BTC. It’s not hard to see why SatoshiBet became such a popular place to gamble in such a short time. It starts when you first enter their site, no sign up is required! You can just deposit and start playing immediatly.
All their games are unique interprations of the classic casino games, such as roulette, blackjack and many more, and they all can be played straight in your browser, so no additional downloads needed. Furthermore they developed an anti-cheat feature that proves the fairness of their games to the player, called Provably Fair. All their games are Provably Fair, meaning you as a player never have to worry that the casino is playing any tricks on you.

As a player you can first discover their games completely risk free with in their Play Money mode. When you are ready to play for Bitcoin, you can easily switch to Bitcoin-mode and deposit your Bitcoin. Deposits are processed almost immediatly, and only require 1 confirmation before they get credited to your account. The best part comes when you are ready and want to withdraw your winnings, your withdrawals are processed within 5 minutes after making your request. This makes SatoshiBet one of the fastest withdrawals in the business. Combined with the spotless reputation the casino carries and the knowledge that SatoshiBet has payed out thousands of Bitcoin to former winners, SatoshiBet is a Bitcoin casino that you can trust.

SatoshiBet is designed by a team originating in Europe, they have tailored their software to accomodate to the increasing demand of European Bitcoin gamblers, including UK players. This makes it an excellent choice of casino to play on if you are from Europe, including the UK.

All in all, SatoshiBet is on the top of the list when it comes to Bitcoin casino’s, thus earning itself a UK Bitcoin casino review.